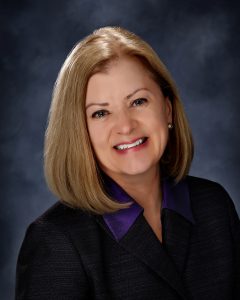 Peggy A. Whipple is admitted to practice before the state and federal courts in Missouri, Tennessee and Ohio, the United States Courts of Appeals for the Sixth and Eighth Circuits, and the Supreme Court of the United States of America.  Peggy’s civil litigation practice has included products liability defense, mass tort litigation including consolidations and class actions, ecclesiastical law and utility and environmental regulation and enforcement.  Her appellate practice has also included the prosecution and defense of extraordinary writ actions.

Peggy, her husband Steve, and their children Jacqueline and Eric chose to return to Missouri and their extended family, and in 2006 Peggy joined the Missouri Public Service Commission as its Chief Counsel for Litigation.  Peggy defended the Commission’s orders in Missouri appellate courts, and pursued litigation in state and federal courts on behalf of the Commission or its Commissioners, including multi-district litigation in federal court in California to investigate violations of Missouri’s privacy laws regarding telephone communications.  In 2009, Peggy joined the Missouri Attorney General’s Office as its Deputy Chief of Litigation, and soon won over $25 million to benefit Missouri state employees’ deferred compensation fund. Peggy pursued Missouri’s full share of the annual Tobacco Master Settlement Agreement payments by presenting the state’s case in the largest arbitration ever convened in United States legal history, and built the state’s case for the damages to its natural resources caused by the underground fire burning at the Bridgeton Landfill in St. Louis County.  Peggy joined Healy Law Offices, LLC in February, 2017.